How do I Record My Screen on Samsung

Samsung is among a few phones that have the screen recording feature, making it cheaper to record activities on your screen. The built-in screen recorder is easy to find and use in all Samsung Galaxy phones, like Galaxy S3, on OneUI and Android 10. It is quite reliable since it allows you to not only record the screen but also adjust settings on the screen recording session. So, you have the liberty to choose the preferred video quality, sound setting and selfie video size.

First access the Samsung free screen recording, go to the “Settings” App and then use the search function. As soon as it is located, tap on “Screen Recorder.”

Alternatively, go to the “quick settings” menu, swipe down, and scroll over to locate it. 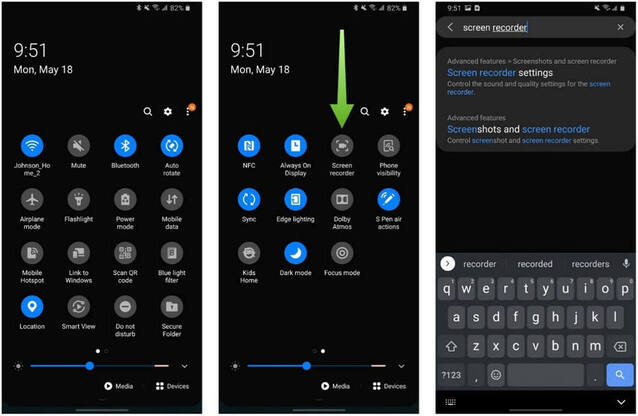 A pop-up will ask your Sound settings preferences. So choose any of the recording sound settings: “No Sound,” “Media Sounds,” or “Media sounds and mic”. After selection, use the “Start Recording” function below to record the screen by your Samsung s7 screen recorder.

When the recording process is complete, select the screen’s “top-right corner Square” to stop. The video will be saved in the “default photo gallery” for later reference or sharing. 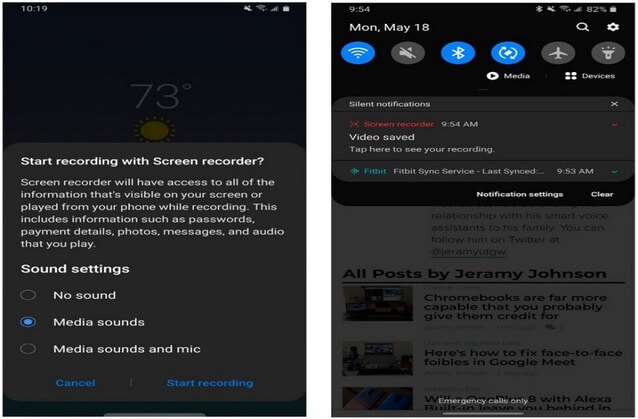 The Game Launcher is a built-in tool found in many Samsung Galaxy phones. Having been included since the launch of S7, it appears to be the most favorable Samsung screen recorder of Samsung S7 as it eases the creation of screen recordings. This feature hosts gaming applications and comes with gaming experience improvement settings. Therefore, it is the perfect screen recording tool for recording games. It does not record the App and Home screens. However, it is still usable when dealing with non-gaming apps.

Begin by launching the Samsung S9 Plus screen recorder app, “Game Launcher.” If it’s unavailable in your phone Settings install it and run it.

Drag the “Library Windows” up, since it’s located at the screen bottom, by swiping upwards. On the Library top right, choose the “three vertical dots” and then tap “Add Apps” to find a list of the apps installed on your Samsung phone.

Choose the app you wish to record and then head to the screen’s top right to tap on “Add”. This action includes the selected app in the Game Launcher’s list of games, letting you access the Samsung screen recorder when the app runs. 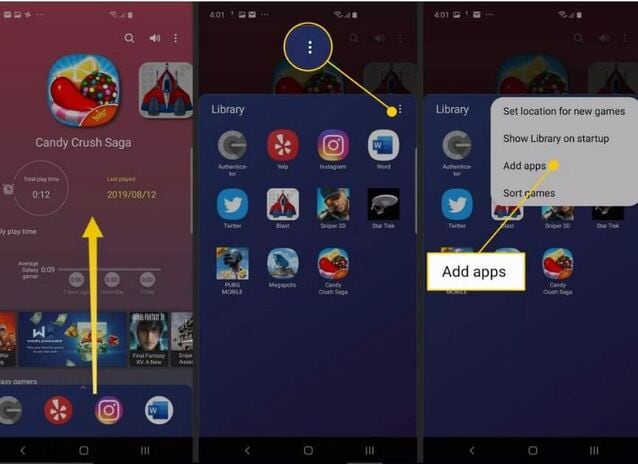 In the “Game Launcher Library,” select the app you chose above. As soon as it runs choose the “Game Tools” button situated in the lower-left corner.

The Game Tools menu should appear immediately and so proceed with recording the screen by choosing the “Record” function on the lower-right corner. 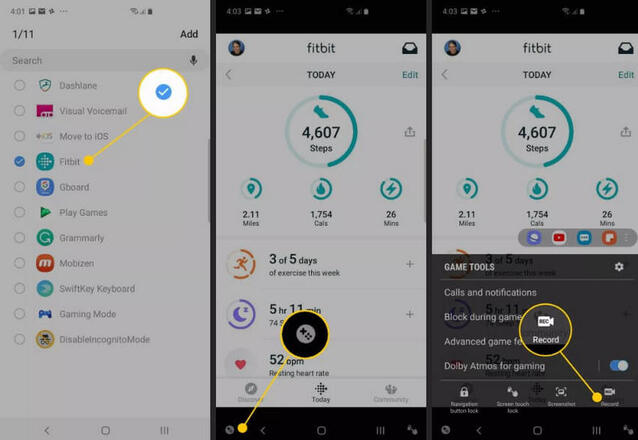 When you have the recording you need, stop the process by selecting the “Stop” utility in the screen’s lower-right corner.

Check your complete screen recording through the “Watch recorded video” function or go to the “Photos” app where other videos are stored. 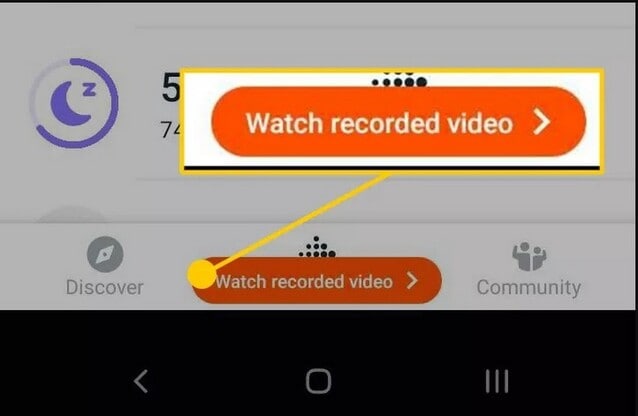 Mobizen is also a great screen recorder for Samsung A6, if you do not prefer using the Game Launcher or if it is absent in your Samsung phone. It is a third-party app that records within the apps as well as App and Home screens. Additionally, it enables viewing, editing and sharing of your recordings. It comes with a settings menu that allows you to change video resolution up to 1080p and frame rate up to 60fps and adjust audio settings as well.

Step 1: Install Mobizen and run it

If you don’t have the Samsung screen recorder like Galaxy S3, Mobizen, go to Google Play Store and download it.  After installation, launch the software.

As Mobizen runs, you will notice its icon on the screen’s side. Tap the icon to see options that include Record video, see your saved content and take a screenshot. Choose the “Record” icon (If you are running the software for the first time, ensure that you provide app permission to record).

A message saying “Mobizen will start capturing video” will show up and so choose “Don’t show again” if you like it. Proceed with screen recording by tapping “Start now.” 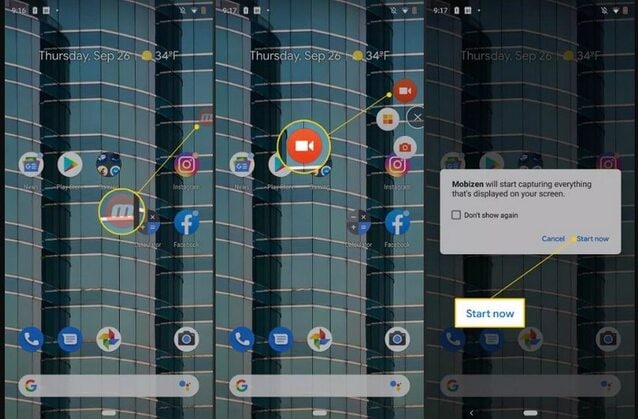 In three seconds, the recording will commence and so you must perform the steps you want to record. Note that this Samsung Galaxy S3 screen recorder records App pages and Home too and its icon shows a timer for recording period.

To finish up the process, tap the “Mobizen” icon and choose the “Stop” function. A pop-up will display to let you decide between deleting and watching the video. The completed video should be in the “Gallery app” in the “Mobizen folder”. 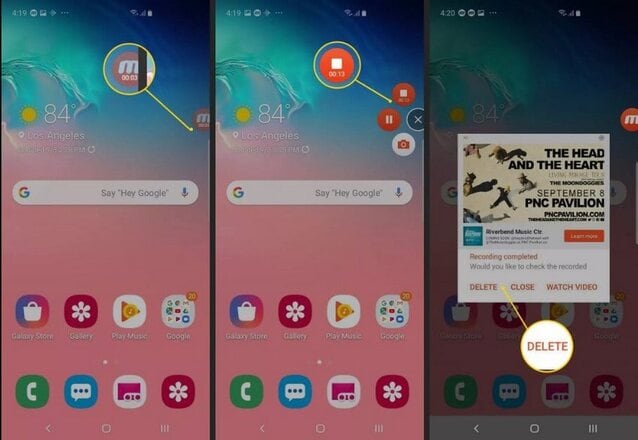 Screen recording using a reliable Samsung S9 Plus screen recorder such as the built-in, Game Launcher or Mobizen is helpful. It supports your in-game walkthroughs, whereby you can teach your friends and family how to play games in their leisure time, or solve technology challenges, by giving a demonstration of applications.

A Samsung screen recorder in Samsung A6 is also reliable when you need to report bugs in applications, especially if you are a beta tester. By simply screen recording a running application, you can capture a bug and send the clip to the developer for correction. 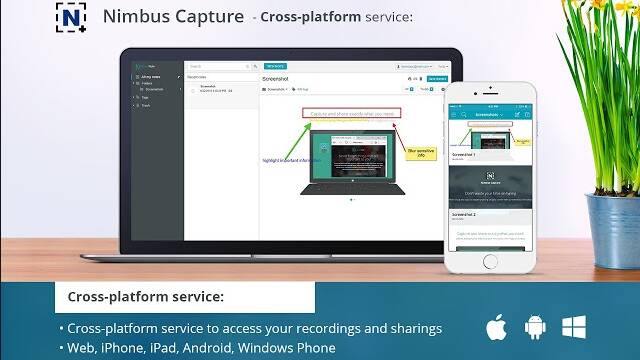