Screen recording has gained popularity with major digital transformations. As the name implies, screencasting or screen recording is a digital recording of the computer screen with audio narration. There are several reasons why people might need to record their screens using the Linux screen recorder. If you are training a group of people, recording your desktop and providing them video tutorials will help them to understand your lessons easily.

Also, you may need to record your screen for sharing bugs in an application, or some may like streaming their favorite game while playing. And for all of your reasons, you will need a reliable and smooth functioning and easy screen recorder on Linux. It is easy to capture your screen on iPhone, Android, and even in Windows and Mac as they come with a built-in feature. Moreover, for Linux users, capturing your screen is not hard either.

Well, here is a list of the best eight-screen recorders that can be used on Linux. All these tools are free and open-source.

First on our list is a very lightweight screencasting tool for Linux, i.e., Kazam. It is a simple and effective GUI-based tool used for recording screens. Though it comes with little configuration settings, it is the most suitable tool for beginners as it is easy to use without getting involved in too many different options. Apart from recording the screen, this tool can also be used for taking screenshots with its in-built feature. 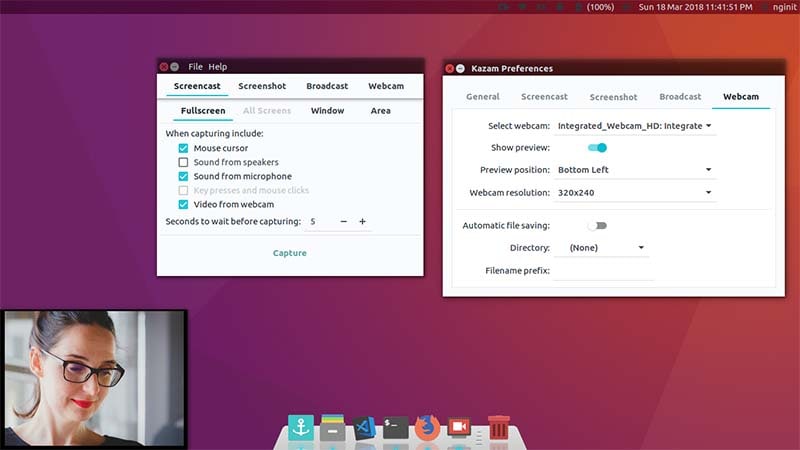 To install this application on your Linux system, open the terminal window and enter the following command: $ sudo apt install kazam

Another user-friendly Linux video screen capture software up on our list is Vokoscreen. This simple screen recorder Linux allows you to select a magnification level (200*200, 400*200, or 600*200). Also, this tool highlights a specific section of the screen. Also, this supports output videos in multiple formats and suitable audio input and one application window recording.

Furthermore, it's equipped with a configurable on-screen camera with options like flip vertical or horizontal, remove the frame of the window or even frame size, invert, white, black, and gray.

you need to use it under the X11 session and not the default Wayland session that ships with Fedora Workstation. You can install it using the following command: $ sudo dnf install vokoscreenNG;

The next entry is Gtk-recordmydesktop that is based on a command-line interface (CLI). It is preferred by users who choose not to work with a graphic user interface (GUI). Also, it is a simple tool, as unlike other applications, it is limited to a specific video output format. Moreover, it supports video output only in .ogv format.

Also, it cannot live-stream your recordings. But this does not make it less appealing. It is equally equipped with appealing features that make it stand out in the market. 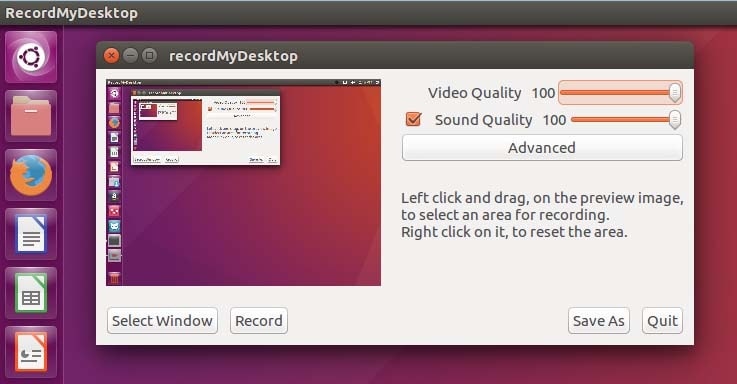 recordMyDesktop is available for installation from the official Ubuntu repository (doesn’t work on Ubuntu 20.04 at the time of updating this article). Just run the following command: $ sudo apt install gtk-recordmydesktop

It is a command-line interface (CLI) based tool used for recording video and audio. This screen recorder is equipped with exceptional features, like allowing users to record desktop sessions to animated gifs. It also allows users to record multiple displays. Additionally, it allows you to record to its internal debugging format.

Moreover, this is done by users for benchmarking purposes or later when they want to convert the recorded file to any other supported format. But, Byzanz does not allow you to stream recordings online on platforms like Facebook, YouTube, etc. 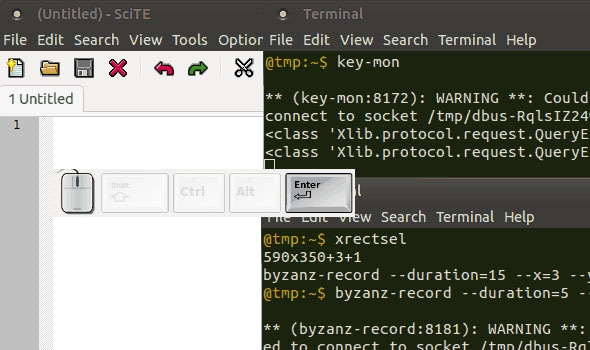 For Ubuntu 14.04 and above, Byzanz is available in the Universe Repository. To install, simply search for it in Ubuntu Software Center, or use the command: $ sudo apt-get install Byzanz

For Fedora, you can use the command: $ sudo yum install byzanz

Next on our list is easy yet powerful screen-casting software for Linux, which is simply named as ScreenStudio. It is a Java-based cross-platform screen recording tool. Also, it allows desktop recording as HD video format, which, later on, can be directly streamed through any video host service.

It supports webcam recording, audio recording from a suitable source, and direct streaming from services like Hitbox, Twitch.tv, etc. Moreover, this allows you to select the screen you want to record in case of multiple screens 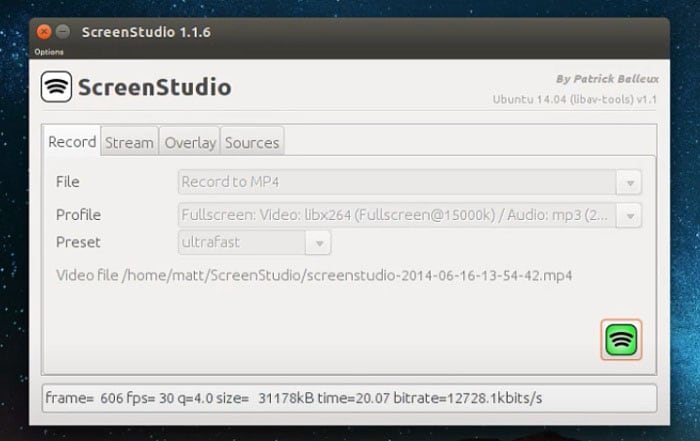 ScreenStudio is relying heavily on FFmpeg provided with Ubuntu 16.04. Any other distros or custom builds of FFMPEG may not be supported. If ScreenStudio does not work on your distro (or custom build), download the source code of ScreenStudio to adjust the proper command to use with FFmpeg. To install dependencies on Ubuntu:
$ sudo apt-get install ffmpeg openjdk-8-jre

Justifying its name, it is quite a simple screen recorder for Linux. Also, it comes with appropriate and rational default settings. You need not alter any option. Simple screen recorder Linux is equipped with small yet excellent and useful features, which involves getting notified of the sound or following the mouse. Also, you can even choose if you want, or you don't have to record the movement of the mouse's cursor.

It is a Qt-based screencasting tool with an easy to use interface. Furthermore, it consists of pausing and resuming options when it comes to recordings. It should be known that resuming after a pause leads to the creation of two files. Well, one with the recording prior to pausing and the second that contains the remaining recording. 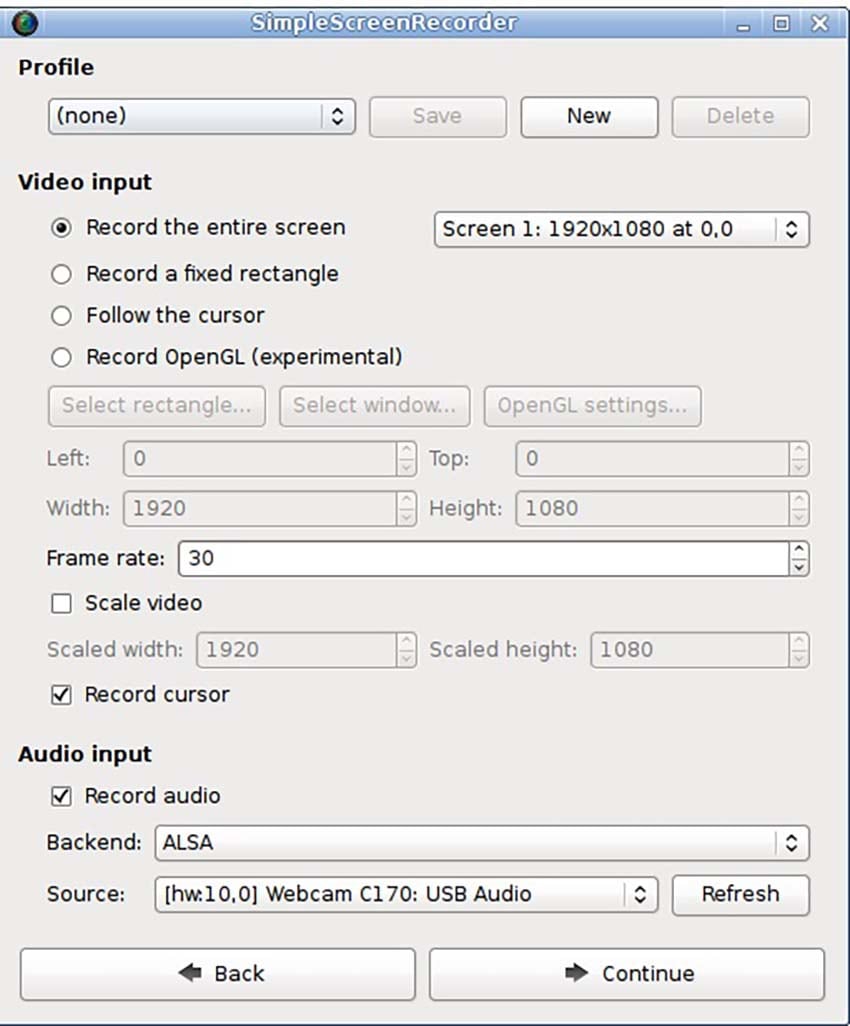 Add this if you want to record 32-bit OpenGL applications on a 64-bit system: $ sudo pacman -S lib32-simplescreenrecorder

OBS Studio is a one-stop solution for everything you need. OBS screen recorder Linux is one of the most advanced Linux screen recorders available in the market. This free and open-source application works well on Linux, Windows, and Mac OS X. Though anyone can use OBS Studio after learning all the plugin and configuration settings, it is best Linux screen recorder suited for users who are into tech videos or live game streaming.

Moreover, it's highly expandable through plug-ins. Furthermore, this allows developers to use APIs to code their own plug-ins. 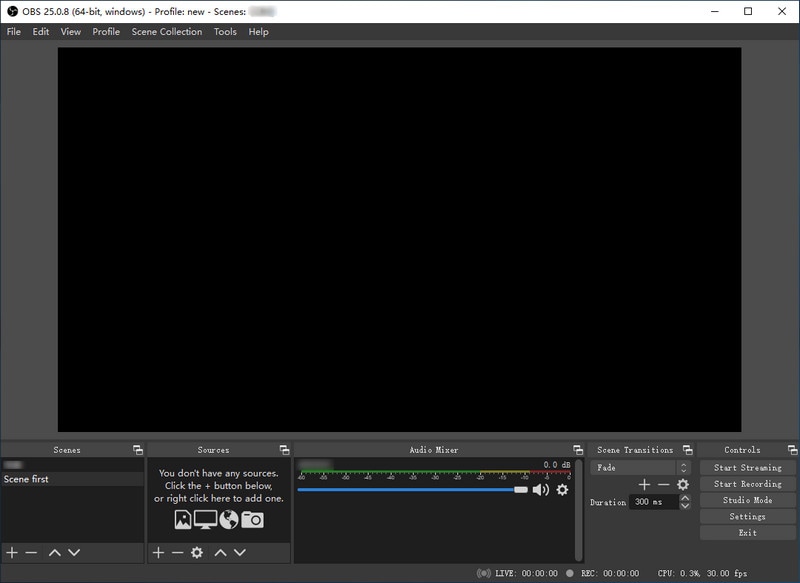 The first time you start OBS Studio, its Auto-Configuration Wizard will be shown, allowing you to choose if you plan on using OBS Studio primarily for broadcasting or recording, and then perform a series of tests to automatically configure everything for your computer hardware. You also have the option of installing OBS Studio on any Linux distribution that supports Flatpak by using the Flathub package. It comes with the OBS-XDG-PORTAL plugin. A built-in plugin that gets screen recording to work under Wayland.

If the fundamental altering highlights of Peek don't satisfy your GIF recording needs, at that point, Gifine is a decent other option. Characterize is a direct piece of the toolkit that may not extend to the sleekest interface yet positively completes the employment opportunity. It offers worked in help for altering and managing your gifs which can save a ton of opportunity with regards to making something unique. 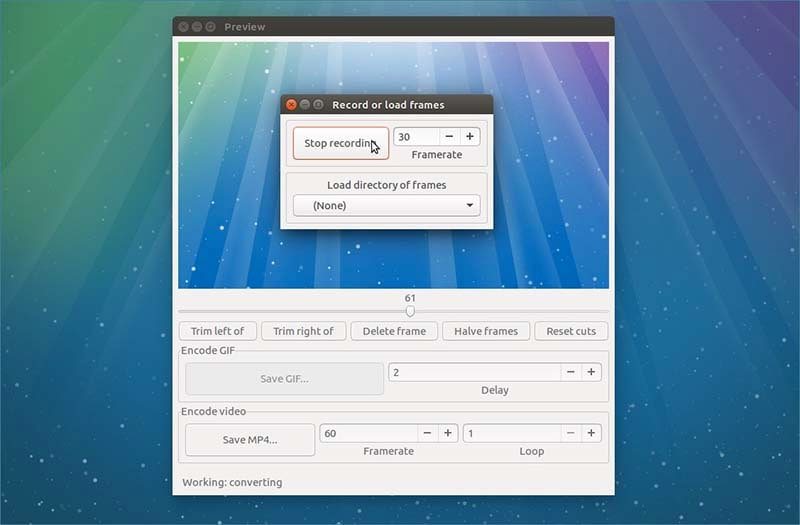 Its establishment is additionally not the least complex and can feel somewhat lumbering as well. The issue is that it is anything but a joke introduce order however a combination of various orders that contain certain conditions too. It needs around 6 orders to be run effectively to be utilized. Even though it is problematic in the establishment interaction, the advantages it brings exceed the underlying blockades.

The Shutter is a component-rich screen capture program for Linux-based working frameworks like Ubuntu. You can take a screen capture of a particular territory, window, your entire screen, or even of a site – apply various impacts to it, attract on it to feature focuses, and afterward transfer to a picture facilitating site, all inside one window. if you are taking screen captures for composing instructional exercises or manuals, you need to alter the picture, for example featuring some piece of it. With Shutter, you don't have to open an outside illustrations proofreader like GIMP, since Shutter boats with its underlying supervisor. 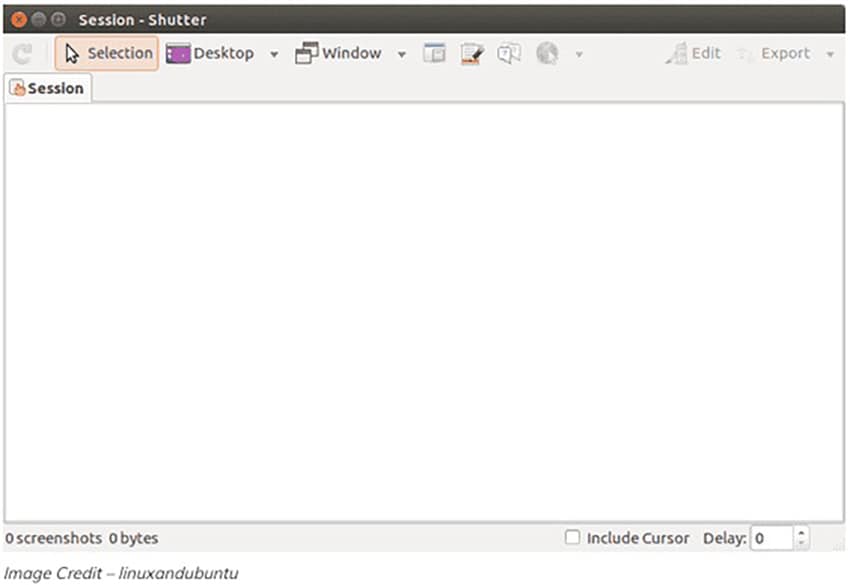 Write the commands below to start installing this toolkit in your Linux:

Green recorder is a free, open-source, straightforward work area recorder for Linux frameworks and composed utilizing Python, GTK+3, and FFmpeg. It upholds sound and video recording on the majority of the Linux work area conditions like Unity, Gnome, Cinnamon, Mate, XFCE, and so forth Right now it upholds MKV, AVI, MP4, WMV, GIF and NUT, and also WebM for Wayland's GNOME meeting. You would simply be able to begin and stop the chronicle by tapping the suitable catch in the fundamental menu. A play button has been included in the principal menu which permits a client to playback of a recorded video. The green recorder package is not available in the distribution official repository so we need to install it from another repository. 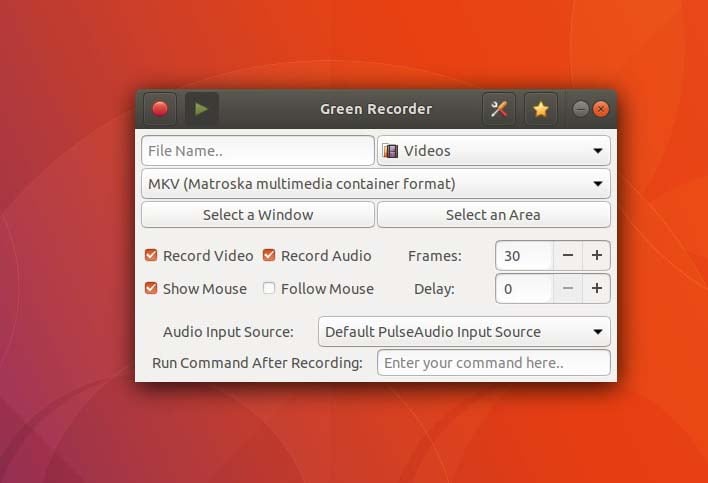 For Ubuntu/LinuxMint use the apt-get command or apt command to install the green recorder.

1. Does Linux have a built-in screen recorder?

Linux has consistently been known for having an enormous arrangement of instruments accessible with comparable functionalities, and the equivalent is the situation with the screen recording. There are a few phenomenal applications that permit clients to record their screens and play with them however much they need. Nonetheless, instead of changing to introducing applications, Ubuntu has an extremely fantastic inherent screen recorder that comes preinstalled with it. It requires no application, no order line alternative for running it, and has no long problem of enacting it. This simple to utilize and shortsighted nature makes it an incredible choice to have for screen recording and merits taking a gander at.

2. How do I record my desktop in Ubuntu?

The way toward recording your screen in Ubuntu utilizing the default screen recorder is incredibly simple. There is neither an alternate way for running the application nor any secret application accessible. Maybe, you can show the recorder to squeezing the console keys Ctrl + Alt + Shift + R. You will want to check whether the account has begun from the orange speck that will show up on the highest point of your screen in the plate region.

The length of the account, notwithstanding, might be dynamic for thirty seconds; the 30s, and from that point forward, it will consequently end. You can likewise physically stop the account by and by squeezing the keys: Ctrl + Alt + Shift + R.

The chronicles from the screen recorder will consequently show up inside the Videos organizer inside your Home envelope once it closes. The chronicle will be saved in the WebM document design, and that is the solitary arrangement it upholds. Default media player that comes preinstalled with Ubuntu does without a doubt uphold the WebM document design.

3. How do I record screen and audio in Ubuntu?

A simple one is ‘simplescreenrecorder’ which can be found in the 18.04 repo. Install it with: sudo apt install simple screen recorder

After that go to start it > Continue > choose the size of the screen to record > tick the box for audio.

For Backend choose PulseAudio. For source choose built-in audio analog stereo which would record the mic instead of the internal audio > choose to save location and the default codec parameters should be ok. 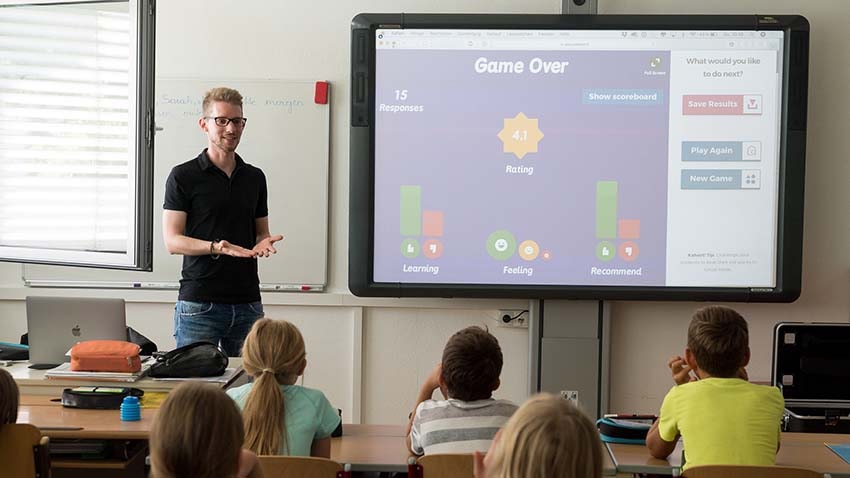 How to Record Screen on Windows 10 PowerPoint 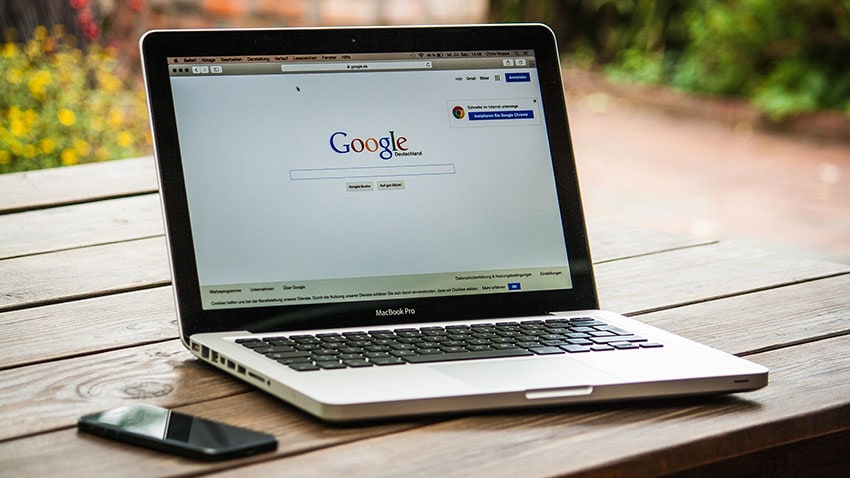 How to Make a Good Screen Capture Work on a Windows PC? 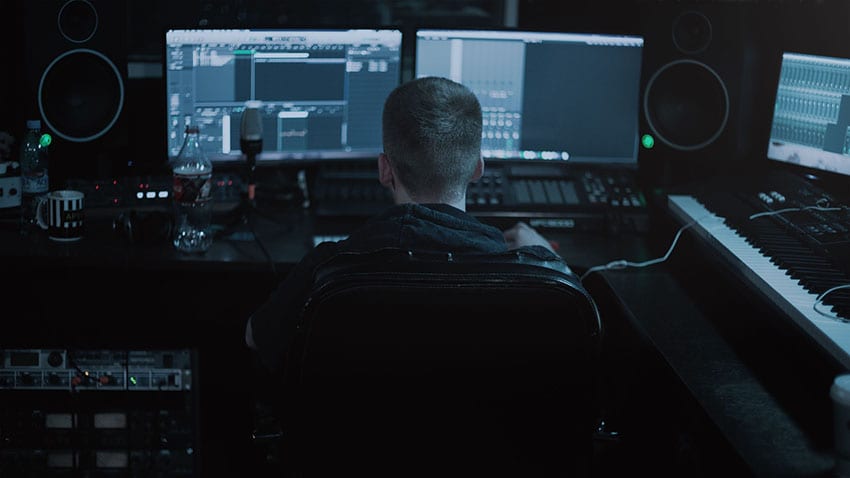